A denial-of-ser­vice attack aims to pre­vent access to a server or web­site. E-banking users can be affected, but also unwit­tingly involved in such attacks. Pro­tect yourself!

There are dif­ferent types of DoS attacks. The most common one con­sists of simul­ta­ne­ously sending out enor­mous quan­ti­ties of data to a ser­vice located on a server, so that it becomes over­loaded and is unable to reply to any fur­ther requests (the web­site is for instance no longer dis­played in your browser). In gen­eral, no data are stolen or dam­aged this way.

Such large data vol­umes are usu­ally send out with the help of a bot net. This is then called a dis­trib­uted denial of ser­vice attack (DDoS attack - see below).

It is impor­tant you follow our “5 steps for your dig­ital secu­rity” so that your device does not become part of a bot net and thus an “invol­un­tary par­tic­i­pant” in a DDoS attack.

The most fre­quent type of DoS attack is a so-called Dis­trib­uted Denial of Ser­vice attack (DDoS attack), which is run from a large number of coor­di­nated devices simultaneously.

DDoS attacks are split into two stages. During the first stage, attackers bring sev­eral devices on the Internet under their con­trol with the help of a Trojan or some other mal­ware and then pro­ceed to build them into a so-called bot net. During the second stage, the attackers will then take con­trol of the infected devices (the bot net) and get them to attack the target (for instance a web­site) all at the same time.

A DDoS attack is very effec­tive, since it takes place from sev­eral devices simul­ta­ne­ously, making it very easy to gen­erate the great volume of data required. This method is mainly used to paralyse servers and web­sites. With DDoS attacks, it is dif­fi­cult to estab­lish the actual orig­i­nator of the attack, since the attacker’s device does not itself attack the target. 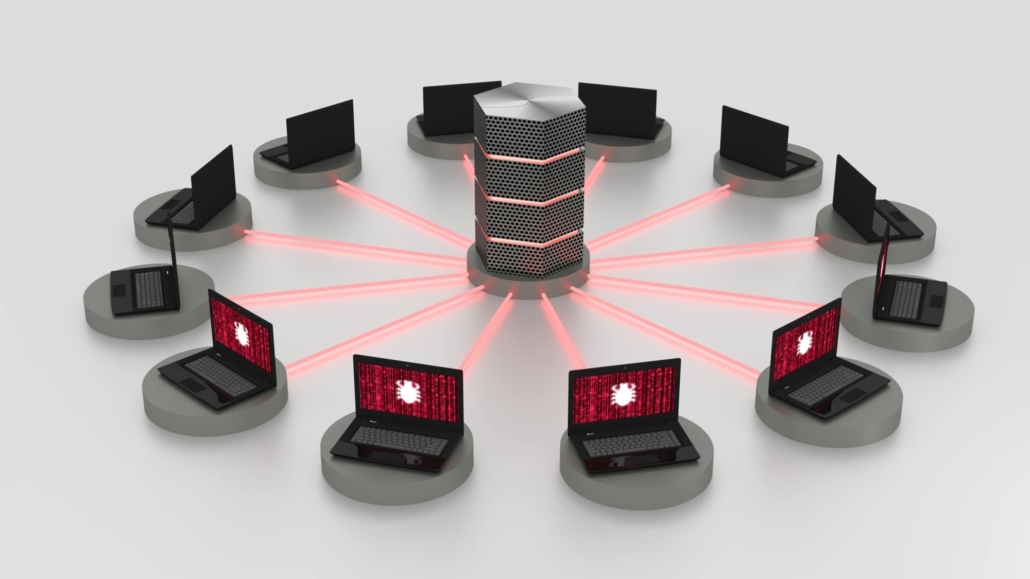 With a denial-of-ser­vice attack (DoS attack), a hacker over­loads or elim­i­nates a server or web­site by inun­dating it with innu­mer­able requests. The pur­pose is to block access for all users.

This kind of attack usu­ally tar­gets a web­site, although as a rule, no data are stolen or dam­aged. The hacker involved only tries to pre­vent legit­i­mate users from accessing the web­site (for instance for e-banking purposes).

Find out about cur­rent Internet threats and some easy pro­tec­tive mea­sures, and how to securely use e-banking.

Find out about mobile banking, mobile pay­ments and how to securely use these apps.

Online course for the under-30s

Learn how to use your smart­phone securely. Next to basics, we will show you what you should know about social media, clouds, mobile banking and mobile payments.

Is your organ­i­sa­tion suf­fi­ciently secure? Learn which mea­sures you can take to sig­nif­i­cantly strengthen your organisation’s IT security.

Because these cookies are strictly necessary to deliver the website, refusing them will have impact how our site functions. You always can block or delete cookies by changing your browser settings and force blocking all cookies on this website. But this will always prompt you to accept/refuse cookies when revisiting our site.