QR invoices are set to rev­o­lu­tionise Swiss pay­ment trans­ac­tions. They con­tain all the rel­e­vant pay­ment infor­ma­tion inside the QR code, replacing those red and orange deposit slips.

The most impor­tant points to remember:

Invoices no longer con­tain any red or orange deposit slips, but instead now include a sec­tion con­taining a machine-read­able QR code in the foreground. 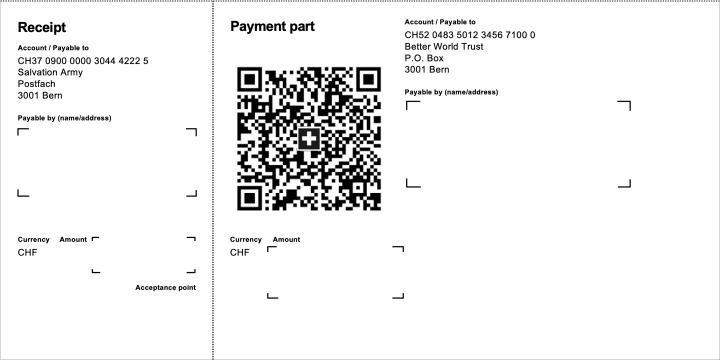 This matrix con­sisting of black and white squares (QR code) can be read by a QR reader, a PC camera or a smart­phone. The code con­tains all infor­ma­tion required to pay an invoice. Addi­tional infor­ma­tion can also be inte­grated into a QR code to facil­i­tate pro­cessing by account departments.

What should you look out for to stay secure?

A QR invoice is basi­cally just as secure as the red and orange deposit slips used so far.

But you should look out for the fol­lowing: Once a QR code has been scanned in, the data recorded will have to be com­pared to the cor­rect pay­ment infor­ma­tion (IBAN, recip­ient, amount, etc.) stated on the invoice in plain text. If these details don’t agree, you must stop your pay­ment immediately!

It is impor­tant to check this, since crim­i­nals can use mass e-mail to send out invoices con­taining a QR code refer­ring to a dif­ferent account number than the one stated in plain text on such an invoice.

Using QR invoices will make it easier to pay invoices. Instead of labo­ri­ously typing in account and ref­er­ence details when e-banking, QR codes already con­tain these details.

As a pri­vate indi­vidual, there are three options to pay a QR invoice as follows:

Open e-banking, scan the QR code in using a QR reader, your PC camera or your smart­phone, and click to trigger the payment.

Open mobile banking app on your smart­phone, scan the QR code in using the QR reader func­tion, and tap to trigger the payment.

A QR invoice works the same as those deposit slips pre­vi­ously used. You can either pay them over the counter at a post office branch, a partner branch, or by sending a pay­ment order in a letter to your bank.

If you are a com­pany and use busi­ness soft­ware to pay your invoices, you should update this to ensure you can also process QR invoices.

Switching to QR invoices is also worth their while for invoicing par­ties. They can print out invoices on blank paper them­selves. This also means there no longer is a need to order any pre-printed deposit slips anymore.

Fur­ther infor­ma­tion can be found on the SIX web­site here: www.einfach-zahlen.ch/en/home/qr-bill.html

Create your own QR invoices

The inde­pen­dent www.qr-rechnung.net web­site enables pri­vate indi­vid­uals, clubs and smaller busi­nesses - who only issue invoices peri­od­i­cally and there­fore don’t want to use spe­cial soft­ware to do so - to create their own QR invoices simply and free of charge.

A QR (quick response) code con­sists of a square matrix made up of black and white squares, which con­tain infor­ma­tion (for instance a link to a web­site) in binary-coded form.

Find out about cur­rent Internet threats and some easy pro­tec­tive mea­sures, and how to securely use e-banking.

Find out about mobile banking, mobile pay­ments and how to securely use these apps.

Online course for the under-30s

Learn how to use your smart­phone securely. Next to basics, we will show you what you should know about social media, clouds, mobile banking and mobile payments.

Is your organ­i­sa­tion suf­fi­ciently secure? Learn which mea­sures you can take to sig­nif­i­cantly strengthen your organisation’s IT security.

Because these cookies are strictly necessary to deliver the website, refusing them will have impact how our site functions. You always can block or delete cookies by changing your browser settings and force blocking all cookies on this website. But this will always prompt you to accept/refuse cookies when revisiting our site.