Time and again, crim­i­nals are using attrac­tive-looking job offers to recruit people as “money mules”, to transfer crim­i­nally obtained funds abroad. Anyone par­tic­i­pating in such “deals” is com­mit­ting an offence.

Time and again, crim­i­nals are trying to recruit cred­u­lous people to become so-called finan­cial agents for their crim­inal deal­ings by placing job offers on var­ious online plat­forms (e. g. net­works like Face­book) or fic­ti­tious web­sites. Those job offers promise high com­mis­sions for little work, and usu­ally don’t require people to have any pre­vious training or exper­tise. These sup­posed com­pa­nies fre­quently have a very cred­ible web­site or abuse the name of some actual com­pa­nies for their ends.

In the con­text of this pur­ported employ­ment, people are to receive funds into their own bank accounts to with­draw and then pass them on abroad by mail (letter/parcel), using a money transfer ser­vice or in some other manner. They are now increas­ingly also requesting assets to be exchanged for crypto cur­ren­cies (e. g. Bit­coins). In return, people are allowed to retain a com­mis­sion. These funds almost always orig­i­nate from crim­inal activ­i­ties, for instance involving Internet crime or drug or human traf­ficking.

Although finan­cial agents are not directly involved in those crim­inal activ­i­ties, they are guilty of money laun­dering, since they are assisting crim­i­nals with moving their funds and dis­guising the money’s illegal origin. 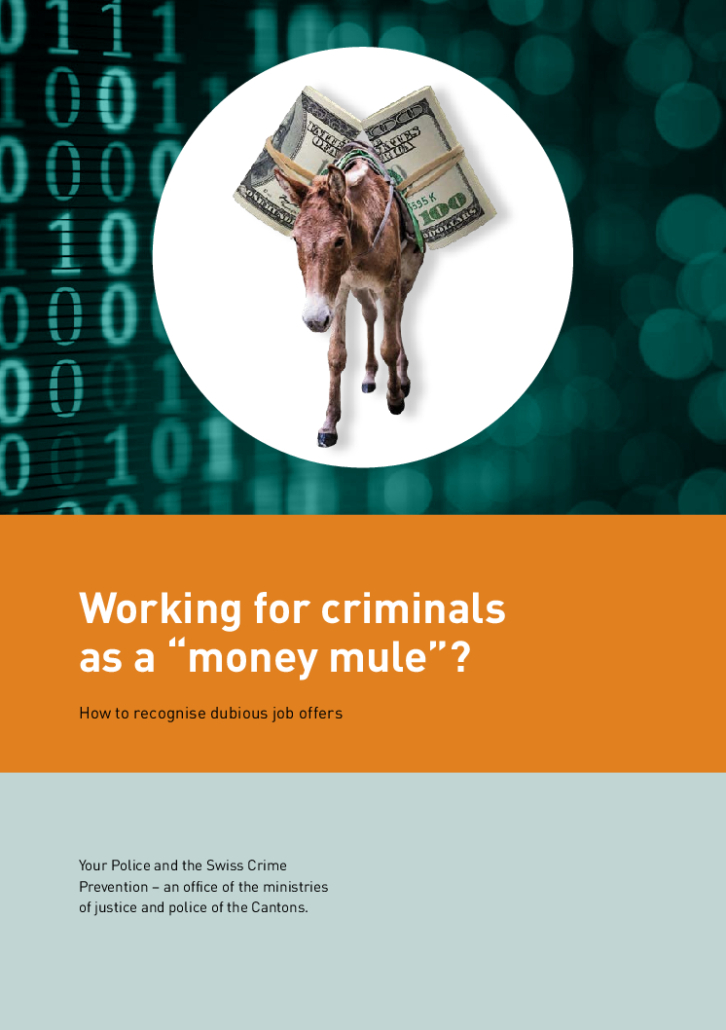 This basic course will point out cur­rent threats on the Internet and con­veys mea­sures as to how you can pro­tect your­self by taking some simple mea­sures.

Learn and prac­tice the most impor­tant mea­sures for your com­puter and e-banking secu­rity on com­puters pro­vided by us.

Because these cookies are strictly necessary to deliver the website, refuseing them will have impact how our site functions. You always can block or delete cookies by changing your browser settings and force blocking all cookies on this website. But this will always prompt you to accept/refuse cookies when revisiting our site.

Accept settingsHide notification only
Send this to a friend